Editor at Large at LinkedIn

PORT HURON, Mich. — In this river town set near the blue-green waters of Lake Huron, a makeover is underway. Once-vacant storefronts now house local boutiques. A long-shuttered downtown department store has become a 12-screen movie theater. Loft-style apartments, luxury condos and a boutique hotel are all under construction.

For the many signs of change, though, this city of 30,000 is grappling with a deeper challenge: finding enough skilled workers to fill open jobs.

Like other small cities across the U.S., Port Huron and neighboring communities in rural St. Clair County are coping with a prolonged labor shortage. The county has lost about 15 percent of its labor force since 2000, Census figures show. Employers are struggling to hire everyone from nurses to machinists.

The region has responded with an unorthodox, if increasingly popular, solution: paying people to relocate.

The Community Foundation of St. Clair County offers up to $15,000 “come-home” scholarships to lure people to live, work and, ideally, put down roots in the region. To qualify, scholarship recipients must have earned a college degree in science, technology, engineering, arts or math within the past decade.

“It’s really more about economic development than scholarships,” says ‎Randy Maiers, the foundation’s president and CEO, who launched the program in 2016. “How do we get our young kids moving back home?”

Across the U.S., small towns are offering a range of incentives to lure workers. Marne, Iowa promises would-be residents free land to build homes. Grant County, Ind. offers graduates $5,000 towards a down payment and closing costs on a house. In North Platte, Neb. — where railroad Union Pacific is dangling signing bonuses of up to $25,000 to attract diesel electricians — a local group is giving $5,000 in matching funds to help employers sweeten relocation deals. And those who head to central Ohio’s Crawford County could receive a $10,000 scholarship, modeled after the program in Michigan.

“If we don’t help them find the solutions … we’ll lose those jobs,” says Gary Person, CEO of the chamber of commerce in North Platte, Neb. “The potential for losing companies is certainly there. Business is going to go where it makes the most sense for them to be.”

Since the Great Recession, nearly all of the country’s population growth has occurred in mid-size and large cities, including the suburbs surrounding them. Small, rural towns, meanwhile, have largely contracted.

Job gains have been even more concentrated. From 2010 to 2016, half of the country’s employment growth took place in just 20 cities, led by places such as New York, San Francisco and Boston, a Brookings Institute analysis found. Mounting student debt has forced many young Americans to take jobs in bigger cities where salaries may be higher. And even if the cost of living is greater, it may be easier to move from one higher-paying job to the next in a larger city.

Still, jobs exist in small towns — if workers will consider them. Michigan’s St. Clair County alone has about 650 openings, and it needs everything from more doctors to retail workers and chemical engineers.

“Our biggest challenge right now is finding skilled workers and, in particular, skilled workers who are willing to relocate,” said Dan Casey, CEO of a local economic development group. “The further away the talent is, the harder it is to get them to relocate.”

Given such a reality, the group is taking its message directly to local residents. It plans to buy space on billboards along an interstate to woo commuters who live in St. Clair but drive an hour to Detroit for work. “We’re trying to sell the message, ‘You’re making this long drive everyday and we have available jobs and you just don’t know about them,’” Casey said.

The county’s scholarship program, on the other hand, is targeted at those who may have grown up in the area, left to attend college and now need some financial help to make their way back. “These young people can’t afford to move home. They can’t afford to put a down-payment on a house or get a condo,” Maiers says, citing rising student debt.

Ten people have received grants so far, including a teacher, a veterinarian, a speech pathologist and a medical laboratory scientist — exactly the sort of educated, in-demand workers the region craves.

Erin Raymond, a 35-year-old STEM teacher at a local elementary school, received a $5,000 grant last year. After finishing her undergraduate degree at Saginaw Valley State University in 2006, she moved to New York, where she taught for three years at a charter school in Brooklyn. She and her husband later moved to northern Michigan. Longing to be closer to family, Raymond applied for a come-home grant last year. She, her husband and their 2-year-old twins moved to St. Clair. “We weren’t even thinking about something like this happening,” she said of the grant. “We were in shock.”

She used the funds to pay off her remaining $3,000 in student debt and to cover moving expenses. In her current role, she teaches 150 middle-school students a semester, instructing them on everything from coding to computer modeling; students recently designed therapeutic toys for children with cerebral palsy. Her class is so popular more than 350 students expressed interest in taking it next year.

To continue drawing workers, Raymond says the community must keep adding amenities — more restaurants and activities, like a recent escape-room concept that opened in town — that appeal to younger professionals.

For some communities, even enticing incentives can’t convince people to move. Marne, Iowa has offered free land to new arrivals for more than a decade, yet only one person has taken advantage of the offer and built a home.

“It’s a big jump to move from wherever you’re at to a small town here in Iowa,” admits Marne Mayor Randy Baxter. The 120-person town is just 45 minutes from Omaha, Neb., and nearby job openings are everywhere from a Menards distribution center to a regional hospital. “Every employer I talk to is begging for help.”

Perception alone might scare some away from small-town life. Before she moved back to Bucyrus, Ohio after spending several years in Panama City, Fla., Lisa Workman says she was “scared to death” that she wouldn’t be able to find work nearby, a fear that proved unfounded. “People just think there’s no opportunity here,” says Workman, who is now president of the Community Foundation for Crawford County, which is located about an hour and 20 minutes from Columbus.

Her foundation began to offer $10,000 come-home scholarships last year to stem a “brain drain” that was exacerbated by the closure of a nearby GM plant in 2010. “Our best and brightest keep going away,” she said, eroding the local tax base and leaving behind a sizable population of retirees. The community may give out its first scholarships as early as next month. 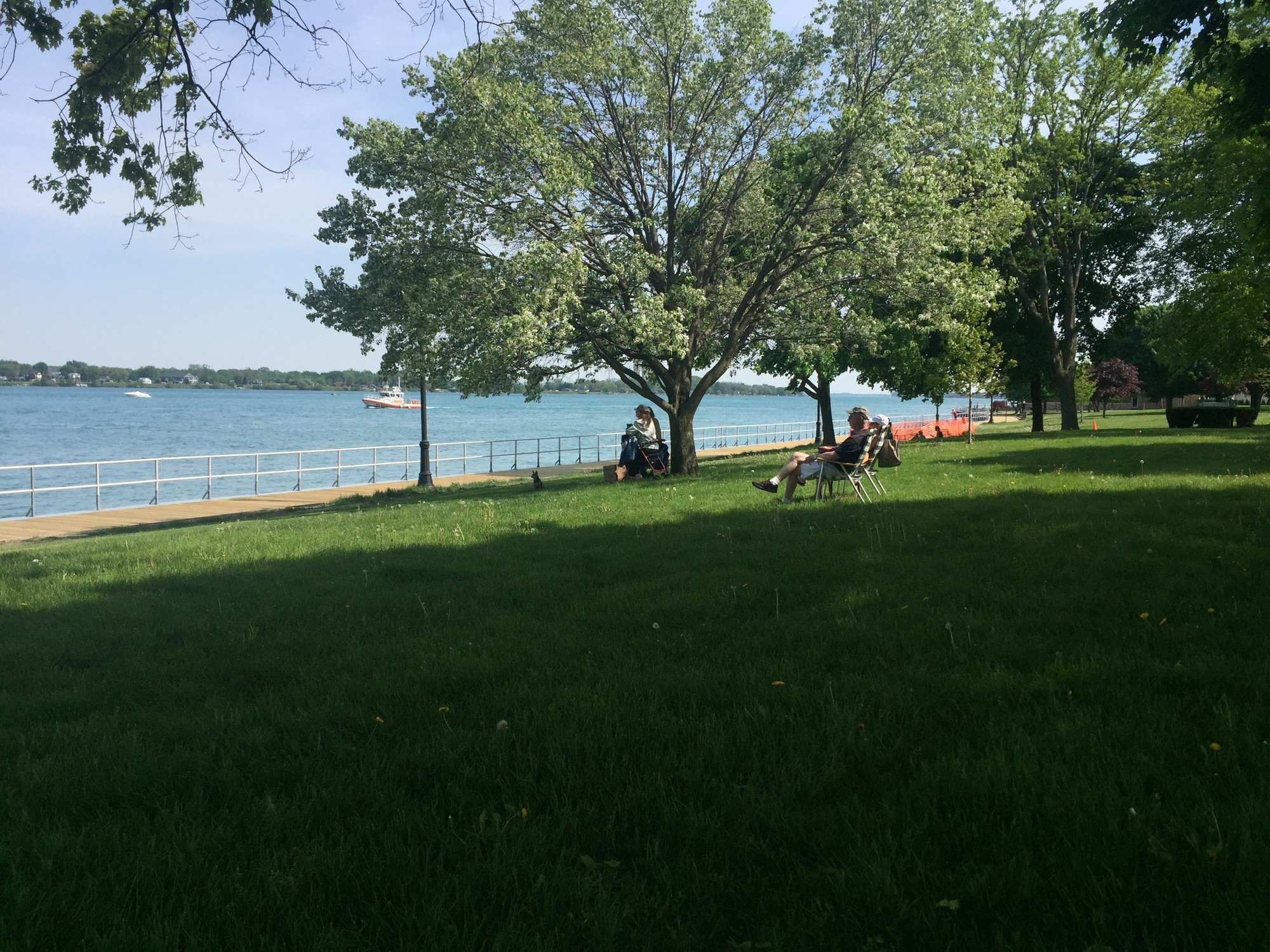 A boardwalk in St. Clair, Mich.

While some programs are still gaining traction, Michigan’s St. Clair County is now in the happy position of needing to raise additional money for its offerings. The scholarship program has attracted 45 applicants, and it has just about exhausted its $100,000 in available funds. (The grants are financed entirely by donations, not taxpayer funds.)

Prospective grant recipients must respond to essay questions about their career goals and explain why they’d like to live in the region. A scholarship committee looks for applicants who understand small-town life.

Still, Maiers is careful to acknowledge that the county’s scholarship program likely has an expiration date. An economic downturn, a change in immigration policies or other shifts could ease the strain of labor shortages in the future. “I hope we’re not doing this in 10 years,” he says.

This article is part of Work in Progress, a new series exploring what it means to earn a living today. Subscribe to our podcast on iTunes or Google Play and see more stories at #WorkInProgress.

“In the process of studying and testing for my CRM I had the privilege of being partnered with Andrew for my mentor.  He did a great job of breaking down areas that were complex.  His patience and constant words of encouragement helped me to believe that achieving certification was possible even when I was extremely… END_OF_DOCUMENT_TOKEN_TO_BE_REPLACED

“Andrew is a highly motivated individual with an extensive knowledge of technology and business.  I recommend Andrew as a coach to anyone.”